The Legislature’s Portfolio Committee on Roads & Transport will conduct a Focus Intervention Study (FIS) to investigate the implications of the gazetted Gautrain expansion project and its viability to address Gauteng’s public transport needs and challenges. The session will take place at the Capital on the Park Hotel and Apartments on Tuesday, 16 August 2022.

The first phase of the Gautrain extension is proposed to cover the area from Little Falls to Cosmo City, through Randburg and Sandton, ending in Malboro. This phase was initiated in October 2018 and has followed all due processes in the Gauteng Transport Infrastructure Act (GTIA), including being gazetted recently in May 2022.

Subsequently, the Committee has received several submissions from organised groups including residents of the Sharonlea, whose residential area lies on the proposed route. Their concerns include the likelihood of their property/ land being expropriated and homes affected, as well as restricted access to essential services and schools in the area.

Other registered concerns were whether the new routes would cater for most commuters and solve public transport challenges in the province, and how the Gautrain would link with other public transport modes – given that the current system does not respond to challenges faced by majority.
The proposed financial expenditure to build the system was another frequent question asked by organized groups.

The Committee is undertaking the FIS as part of its oversight mandate on the Gauteng Department of Roads & Transport, to gauge whether the extension project will solve the Province’s problems and deliver the long-overdue relief to commuters.

The FIS is part of the Committee’s comprehensive budget review process for the current financial year, through which it scrutinizes all budgeted initiatives of the Department to ensure that they contribute to sustainable service delivery.

ISSUED BY THE GPL’S COMMUNICATIONS UNIT ON BEHALF OF THE CHAIRPERSON OF THE PORTFOLIO COMMITTEE ON ROADS AND TRANSPORT AT THE GAUTENG PROVINCIAL LEGISLATURE, HON. GREGORY SCHNEEMANN.

EDEARD Committee focuses on the performance of Gauteng Enterprise Propeller 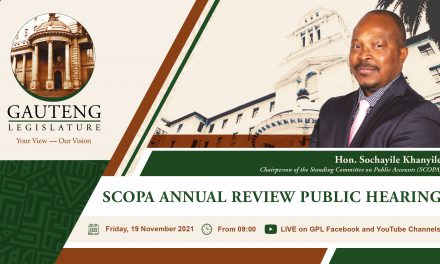