The Gauteng Provincial Legislature will on Thursday, 25 February 2021, at 10h00 host a House Sitting where Gauteng Premier, Honourable David Makhura’s State of the Province Address (SOPA) will be debated. This Sitting takes place after the delivery of the SOPA by the Premier at the Official Opening of the Gauteng Legislature this past Tuesday, 23 February 2021.

The Sitting will be conducted as a hybrid Sitting in adherence to current lockdown regulations to minimize the spread of Covid-19.

Members of the media who wish to be physically present at the GPL to cover the Sitting are urged to RSVP by sending their names and media house they represent to TKhumalo@gpl.gov.za before close of business today.

The Premier will provide his reply to the debate during the same Sitting.

ISSUED BY THE GPL’S COMMUNICATIONS UNIT ON BEHALF OF SECRETARY TO THE LEGISLATURE, MR PETER SKOSANA

Official opening of the legislature 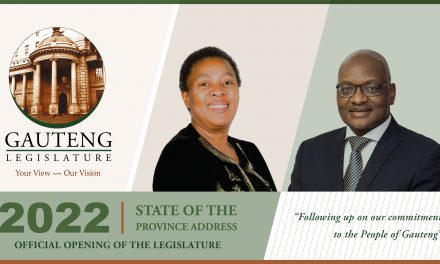 2022 STATE OF THE PROVINCE ADDRESS